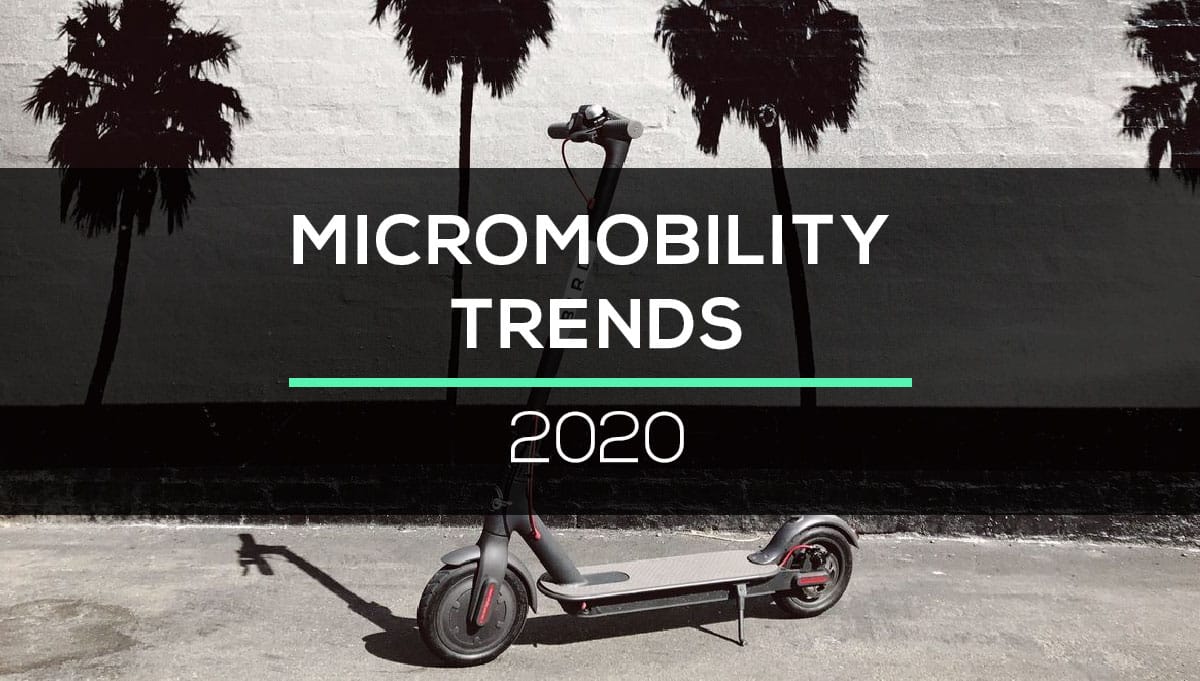 Micromobility companies across the globe have progressed significantly in the past several years. Plenty of startups worldwide have raised venture capital (VC) or teamed with other companies via acquisitions to catapult themselves forward in the industry.

This momentum only showcases consumer demand for last-mile transportation. And that’s just for starters. Here’s a roundup of 2019 happenings and what to expect from the micromobility space in 2020.

This past year encouraged massive VC funding and record-setting growth for many micromobility companies throughout the world. According to the numbers, this is only the beginning of the explosive growth.

The United States is getting a significant piece of the pie, too, as it relates to the global investment in the space. Both Bird and Lime reached billion-dollar valuations within their first year of inception, raising $275M in fresh funding and $310M in Series D funding respectively. Aside from some of the marquee names, several micromobility companies pursued VC funding successfully, including:

And in Latin America, Grin and Yellow will soon merge and rebrand, forming Grow Mobility. What’s more, is that companies from all over the world are announcing significant VC raises, such as:

Graphic by Base10 from source date: Public announcements, Crunchbase, Tracxn, Base10 research

Whether it’s due to a lack of supporting infrastructure or limiting regulations, only nine US states don’t offer any micromobility options. Who’s to say how long their disconnection will hold out, though?

Nevertheless, new US cities are continually opening their streets to the micromobility trend.  For example, Jump, Lyft, Skip, and Spin recently won a bid to deploy up to 10,000 scooters in Washington DC. Italian newcomer, Helbiz, also won a permit to launch at least 2,000 e-bikes. Revel followed suit for both Brooklyn and Queens, offering last-mile options for both boroughs.

With 2019 being a year of dynamic expansion, experts predict a micromobility theme of professional development for 2020. Think about new rides and acquisitions as well as fresh regulatory updates.

Although the days of e-scooters dominating the space are not so long gone, new types of mobility makes it feel that way. Here are some up-and-comers:

For some areas in the US, significant changes are planned for the ridesharing space in 2020. In California alone, the shift in gig job classification (AB5) could have a considerable impact on gig-based companies, such as Uber and Lyft.

That said, Uber’s insurance company, James River Group Holdings, Ltd., is canceling its policy with Rasier (an affiliate of Uber). According to J. Adam Abrams, the chairman and chief executor of James River, the Uber account hasn’t met their profitability expectations.

An affiliate of Gett, Juno, is shutting down its operations, beginning the shut-down in NYC on November 18, 2019. According to Gett CEO Dave Waiser, a strategic partnership with Lyft is in the future as well as a possible initial public offering (IPO). Still, amid the transition, Juno drivers will be encouraged to join Lyft ranks.

Meanwhile, Chicago Mayor Lori Lightfoot introduced a new fee structure that decreases ground transportation tax for shared rides in specific neighborhoods and increases it for shared and downtown rides. Aside from the Windy City, though, plenty more fees for drivers exist merely to operate in particular cities. This taxation of sorts is expected to continue, no doubt.

Lastly, in light of unfortunate ridesharing situations, North Carolina lawmakers have signed the Passenger Protection Act into law. This new regulation will require rideshare drivers to display a printed license plate number on the front of their vehicle as well as illuminated signage in their vehicle. Without both, rideshare drivers face a $250 fine. Also, this law makes assaulting or impersonating a rideshare driver a misdemeanor.

Acquisitions in the Space

When it comes to who bought out who, here’s the scoop:

The team here at Founder Shield strives to stay on top of micromobility trends, news, and industry knowledge. That said, here are the conferences we attended in 2019:

Plenty of insurance carriers have struggled to wrap their policies around some genuine micromobility challenges. Chief among these is the risk of injury. Of course, some companies are meeting safety risks with technology and making headway. Still, in terms of insurance for micromobility, here are a few other trends we’ll see in 2020:

Want to know more about micromobility insurance? Talk to us! You can contact us at ​info@foundershield.com​ or create an account ​here​ to get started on a quote.