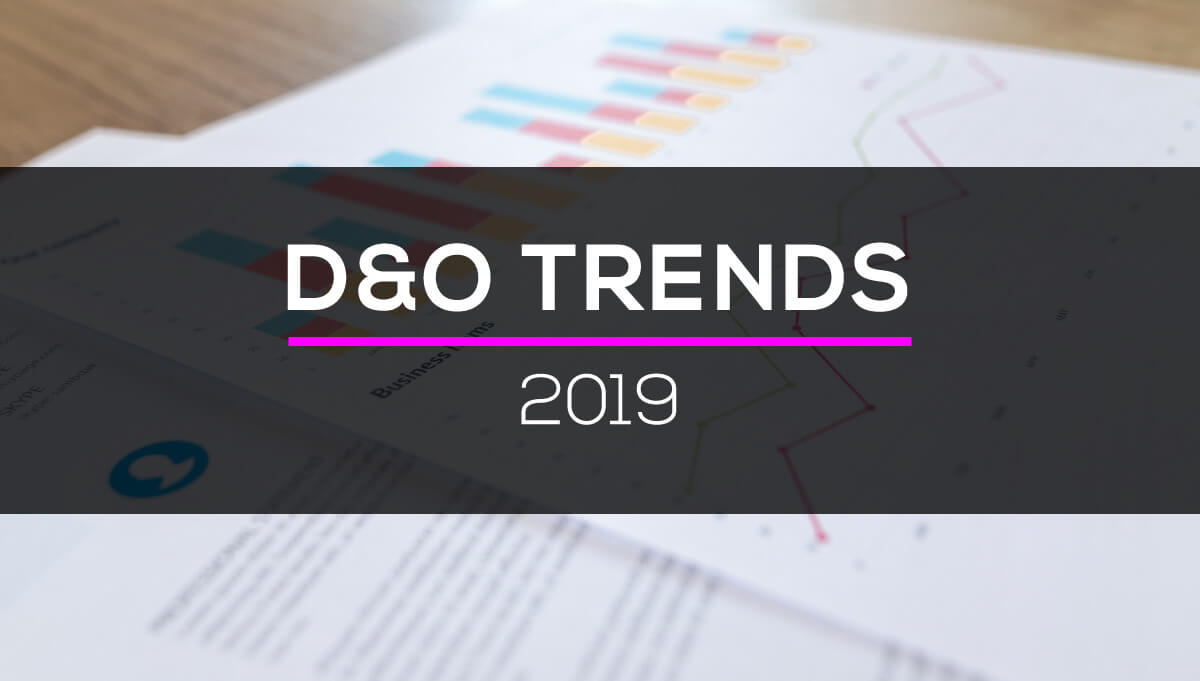 D&O insurance pricing has flown under the radar for several years, with decreasing premiums and increasing market capacity.  But if industry expert projections hold, those days may be coming to an end. In the past, D&O insurance may have been purchased as an afterthought for some companies.

Seemingly low risk coupled with affordable premiums, made purchasing a D&O policy, a “why not” kind of decision. Now increasing claims cost, new risk factors, and a soft market have begun to affect the D&O industry, and all players must prepare for some changes.

Here we will look at where the D&O market has been as well as what to expect for pricing in 2019.

Historically, D&O insurance is rated based on several factors:

In short, D&O policies were underwritten based on accounting and financial statements. However, today’s D&O market calls for a different approach. The new D&O claim involves data breaches, privacy concerns, social media usage and other events that are often unpredictable by standard underwriting practices. These events have nothing to do with a company’s financial situation, making them almost impossible to quantify.

Once believed to be necessary for only large, publicly traded companies, even small-cap companies now seek the coverage a D&O policy provides. Corporate executives, business owners, and company directors and officers are held to exceedingly high standards. Proper D&O insurance helps protect the leadership in cases where a breach is perceived.

In exchange for an annual premium D&O coverage protects the executive board from claims arising from wrongful acts, discrimination, and fines from the Securities and Exchange Commission (SEC) among others. Although the nature of D&O claims is changing, as is the market, the main players remain the same. The largest D&O carriers include:

How has D&O Pricing Changed?

Still, premiums remained relatively flat for most of the year, with a slight increase in the last quarter of 2018. Although premiums have remained mostly unchanged, loss ratios and costs to defend claims have risen. In short, the D&O sector faces new and growing risks with little to no new premium growth.

Traditionally, D&O insurance protected executives from claims of misrepresentation in fiduciary duties. However, the risks for today’s executives are more complicated. Event-driven claims, named so because the source of the litigation is a disruptive event in a company’s operations, are on the rise.

The 2018 California wildfires are illustrative. After the fires, shareholders filed a securities lawsuit against utility companies Edison International and PG&E after reports surfaced the utilities were at least partially responsible for the fires.

Similarly, shareholders brought a suit against Boeing after it was reported one of their airliners was involved in the Lion Air 610 crash.

These event-driven lawsuits are a departure from typical D&O litigation and may not always hold up. The claims may lay more along the lines of mismanagement of operations rather than misrepresentation. Still, the suits present considerable challenges for D&O carriers because they must be defended.

Event-driven suits also complicate underwriting. Because the lawsuits are based on significant, but unpredictable events, there is a lack of underwriting tools in which to quantify such events. Insurers are left with very little on which to base price for this emerging risk.

The most significant data breach litigation in 2018 is the settlement of the Yahoo securities lawsuit. While securities suits over data breaches have cropped up over recent years, Yahoo represents the first such suit to earn a large payout to plaintiffs. In all, the company has agreed to pay a total nearing $145 million to settle the management liability claims and regulatory fines and actions.

Granted, the allegations leveled against Yahoo in the suit are particularly damaging. The company accused of mishandling users’ private information, and also charged with covering up the breach.

Although forthcoming data breach litigation claims may not contain the same level of indiscretion and so not win such large settlements, the Yahoo settlement may have succeeded in at least opening the door to higher plaintiff settlements involving data breaches.

MeToo litigation evolved in 2018 to include not only the perpetrators of wrongful acts involving sexual harassment or discrimination but also company board members. For example, a shareholder derivative lawsuit brought against sports giant Nike alleges the board allowed a “boys club” atmosphere in which men received pay raises and promotions more often than women.

The suit turns on allegations of a hostile atmosphere, unfair treatment and pay inequality based on gender.

Cost of D&O by Company Size

D&O pricing trends for the past few years differ according to company size. A study by property and casualty reinsurance company, TransRe, shows the price deterioration of D&O insurance is most significant among large-cap companies.

The October 2018 study shows the prices for all layers of D&O insurance for large-cap companies are down 18 percent. The highest excess layers decreased by 30 percent between 2013 and 2018.

Mid-cap companies showed a 3 percent decline in the working layer D&O premiums with an overall reduction of 17 percent across all layers and a 28 percent dip in the highest excess layers.

Small cap companies are the outlier, showing slight increases in pricing between 2017 and 2018: 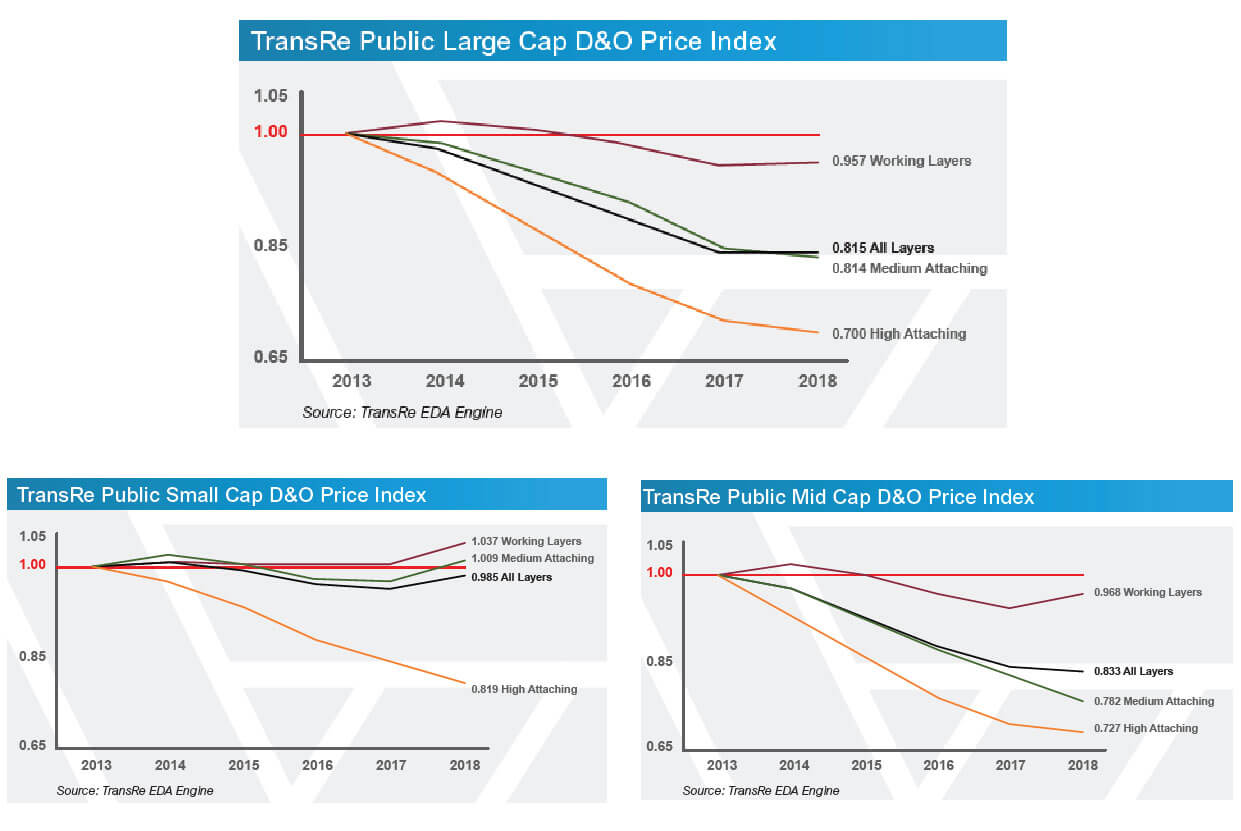 As the TransRe report illustrates, the D&O outlook for 2019 is difficult for carriers. Although the market for small-cap companies, as well as a few specialized classes such as life sciences and IPOs, may be hardening a bit, the industry is handicapped by increasing claims costs and a history of decreasing premium. Large market capacity only adds to the challenge.

So, what can we expect for the 2019 D&O market? Here are a few key takeaways.

Rising claims costs, years of decreasing premiums, and the rise of event-driven claims are taking a toll on the D&O market. Changes in the market are on tap for 2019, and every player in the D&O game must be prepared.